The Burden of the Chernobyl Catastrophe for Belarus Inhabitants.

About 35% of the radioactive particles from the Chernobyl catastrophe fell directly or indirectly on the Gomel region in southern Belarus. Experts consider that about 240 million Curie will contaminate this area in the next few decades.

In this area today are living one half a million children, 80% of whom the Belrad Institute considers to be ill. The Belrad Institute is dedicated to research the damages of Chernobyl and to develop a Support Program for Children. This Belarus Institute is supported by physicians from Europe from whom we also received precise data.

The immune system of children is greatly damaged by the radiation which is taken up via their food and drink. This leads to diseases in almost all systems. At the end of this chain is a ten times greater incidence of cancer in contaminated versus non-contaminated areas. 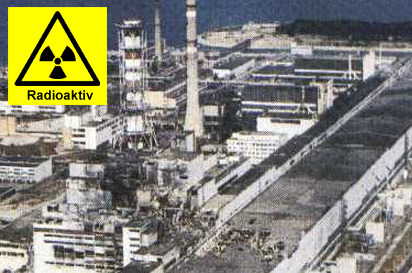 Chernobyl Nuclear Reactor after the Catastrophe

25th April 1986: In the late evening the employees of Block 4 of the Chernobyl Nuclear Reactor began an experiment. They wanted to test how long the turbine would run after they had shut down the reactor. The safety system was disconnected.

26th April 1986, 1:23 AM: The Control Room Alarm sounded after the sudden breakdown of the Water Coolant System. The reactor went out of control.

26th April 1986, 1.24 AM: Two major explosions destroyed the reactor and the machine room. Eight tons of radioactive plutonium contaminated fuel and fragments of the destroyed graphite rods were catapulted into the air.

26th April 1.28 AM: The Company Fire Fighters reached Reactor Block 4. None of these fire fighters survived the reactor catastrophe by more than a few weeks.

26th April 1986, 6:35 AM: The reactor fire, which began after the explosion and at times threatened to spread to Reactor Block 3, was extinguished.

26th April 1986, Morning: The 50,000 inhabitants of the city Pripjat could see the open, glowing reactor from their balconies which were just a few kilometers away from the atomic reactor. The atomic reactor employees who received the most radiation were flown to Moscow. Members of a government commission, formed to manage the consequences of the catastrophe, were flown immediately to the crisis zone.

April 27th 1986: The Chernobyl catastrophe was described in a few words in the Communist Party newspaper Pravda. Helicopters began to drop large quantities of cement and sand onto the reactor. During the day, the inhabitants of Pripjat were completely evacuated; a 15 km long bus column formed.

April 28th 1986: In Scandanavia increased amounts of radioactive radiation were measured. In the West, rumors circulated about a worst case scenario in the Soviet Union. In the evening the Soviet news agency TASS reported for the first time a short notice of the accident in the Chernobyl atomic reactor.

May 1st, 1986: May 1st celebrations were started all across the Soviet Union. The traditional mass parade took place in the Ukrainian capital city Kiev less than 100 km away from the stricken reactor.

May 4th 1986: Many inhabitants from a 30 km zone around the atomic reactor were evacuated. Seventy-six communities in the Ukrainian district of Kiev and in the Belarus district of Gomel were abandoned.

November 15th 1986: The cement protective shell of the destroyed reactor, the so-called sarcophagus, was completed.

July 1987: The power plant’s Director Victor Brjuchanow and three other managers were sentenced to life-long imprisonment.

December 2000: The nuclear power plant Chernobyl was finally closed down after long negotiations between Ukraine and the West. The brittle sarcophagus of Reactor 4 should be covered by a second cement shell by 2008.

We say THANK YOU!
The photos of the Chernobyl reactor were released by the Shitkowitschi Childrens' Association – Life after Chernobyl.